The park is comprised of 29 different islands with Komodo, Padar, and Rinca being the largest three. The islands all developed from volcanic activity and display as rugged rounded hills reaching heights of 2,411 feet (735 m).

Savannah vegetation is the most commonly experienced flora in the island area. On islands that reach over 1,640 feet (500 m), there are cloud forests present. The mangrove forest is common in the coastal areas of the larger islands which offer protected bays.

The islands are also rich in the marine life of the waters surrounding them. Whale sharks, sunfish, rays, seahorses, and octopuses are some of the more popular. Wildlife is limited with deer, boar, and buffalo. However, the leading species is the Komodo dragon which is the world’s largest lizard. 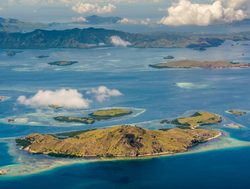 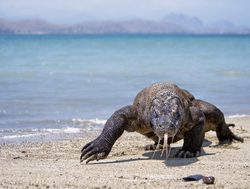 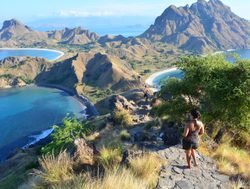 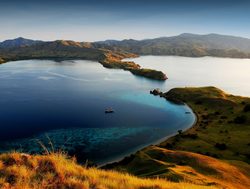 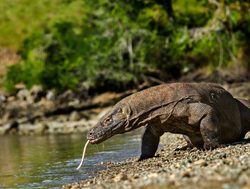 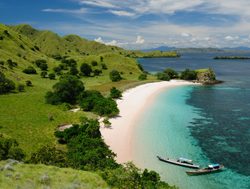 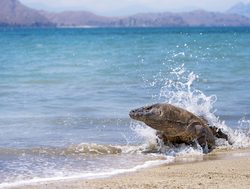 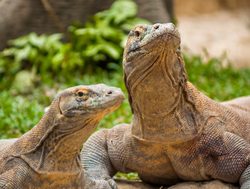 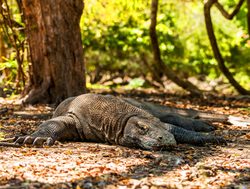 The majority of visitors to Komodo National Park are there to experience the world’s largest lizard, the Komodo dragon. The dragon populations are kept strictly to the islands of Komodo, Rinca, Gili Motang, Gili Dasami, and Flores.

The largest population of, approximately 2,000, Komodo dragons are found on the island of Flores. Komodo island is second with a population of 1,700 dragons. Watching a Komodo dragon hunt and kill its prey would highlight their power and significance. 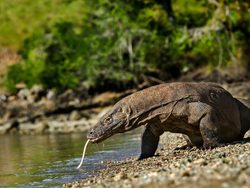 Komodo dragons have no predators; they sit atop the food chain. They can take down a full-grown buffalo or deer without complication. They are the king of the national park here in Indonesia. They will eat almost anything including smaller Komodo dragons.

Komodo dragons can live up to 30 years while reaching lengths up to 10 feet ( m) and weighing up to 330 pounds ( kg).  This makes them the largest and heaviest lizard in the world.

These massive lizards feature venomous bites that transmit a poison that prevents the clotting of blood.  This is followed by bites that tear away flesh creating massive bleeding.  This sends the afflicted prey into shock and dismay.  The dragon tracks its sense until death occurs of the prey which may not take long.

Komodo Dragons may eat as much as 80% of their body weight during each eating session. These dragon lizards have a reproductive challenge to their population because they almost always bear a son leaving breeding options quite limited.

There are trails varying from short and easy to longer and more moderate rated based on abilities.  The majority of exploration of the park is done through the assistance of guided tours. There are lookout points and visitor centers that allow you to learn information as well as capture glimpses of the world's largest lizard.

This is one of the easier hiking opportunities across the national park.  Although parts can be steep and require effort, there are steps in many cases to help make ascents to lookout points easier.

The trail even begins as a boardwalk.  This gives you a chance to get outdoors to see the picturesque scenery and offers vistas that provide views of some of the most iconic images of the Komodo Islands.