Royal Manas National Park is located in the southern part of Bhutan just east of the indent in the country’s border with India.  The park covers an area of 408 square miles (1,057 sq km), creating the fourth largest national park in the country.

Royal Manas is the oldest protected area in Bhutan and it is affectionately referred to as the Conservation Showpiece of the Kingdom.  The park is adjacent to Jigme Singye Wangchuck National Park, Phrumshingla National Park (formerly Thrumshingla), as well as Manas National Park in India and collaborating together to protect the wilderness and wildlife that calls the region home.

The streams that feed in from the mountains into the river create dense riverbeds and surrounding grasslands along with rich vegetation.  The vegetation gives way to an abundance of wildlife.  The various forests blanket much of the park’s terrain which features 348 different species of big trees.

The national park gives way to their own unique “Big 5” which is traditionally ascribed to Africa.  The Bhutan Big 5 include the Bengal tiger, Indian rhinoceros, Asian elephant, clouded leopards, and Asiatic water buffalo or the gaur.  Other wildlife includes leopard, civets, pygmy hog, golden langur, and many others.

There are over 425 species of birds nesting and migrating through the park boundaries making this a haven for birdwatching.  You may not be interested to know, but there are over 10,000 species of insects.  The river is home to the Ganges river dolphin and many different species of fish. 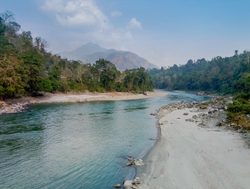 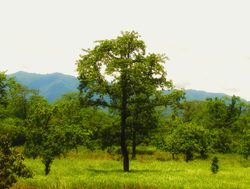 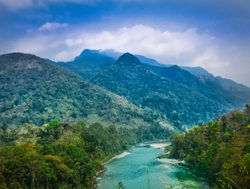 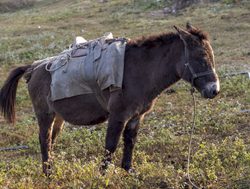 The varied ecosystems and habitats give way to a variety of landscapes and experiences with nature.  The wildlife is one of the main highlights of the national park.  Many people will engage in an elephant safari to experience the park.

Bhutan has its own version of the Big 5.  The African Big 5 includes lion, leopard, elephant, rhino, and Cape buffalo.  Bhutan delivers a slightly different take including Bengal tiger, elephant, one-horned rhinoceros, leopard or clouded leopard, and the gaur or water buffalo.

You have two different ways to check off the Bhutan Big 5 list or you could expand it and call it the Big 7.  A visitor would have to consider themselves extremely blessed to see all seven.

Hiking in the park is a special treat and is primarily accomplished through the multiday Gomphu-Manas-Norbugang Eco-Trail.

This is a trail that treks through the jungle and amongst the mountains.  It is a four-day trek spending approximately 4 hours each day hiking between the eco-friendly camps.

Royal Manas National Park was created as the first protected area in Bhutan.  It is the most biologically diverse protected area in the country and protects many different endangered species of both flora and fauna.

It is recognized as one of the world’s most significant biological conservation sites.  The park also links to Jigme Singye Wangchuck National Park as well as Phrumshingla National Park in India creating a continuously protected region for both the wilderness and wildlife.

Royal Manas is a UNESCO World Heritage Site as a reflection of its rich biodiversity.  There are 30 mammalian species that are vulnerable or worse with two of those being critically endangered.